Events The Craic Will Be Dobry!

Winter Himalaism – an evening with Adam Bielecki in Dublin

Adam Bielecki, one of the world’s most accomplished high altitude climbers, is coming to Dublin to talk about his  climbing career and winter himalaism.
Adam Bielecki is a 33 years old psychologist, high altitude climber and professional athlete from Tychy, Poland. He is a member of Polish alpine climbing and winter himalaism national squad.
Over the the last 20 years he climbed more than 100 routes in Tatras and Alps, both during the summer and winter. Leader of multiple expeditions to various mountains on 5 continents. Recipient of prestigious KOLOS 2000 (the highest Polish award for achievements in outdoor sports) for becoming the youngest person in the world who ascended Khan Tengri 7,010 m solo in alpine style.
During short period of 11 months he has climbed Makalu 8463m (autumn 2011) Gasherbrum I 8068m (first ever winter ascent; 2012) and K2 8611 (summer 2012). In 2013 he made first winter ascent of Broad Peak 8051m. In 2014 he participated in successful expedition on the north face of Kangchenjunga 8598m led by Denis Urubko. In 2016 he attempted to summit Nanga Parbat 8125m in winter in alpine style. He has never used supplementary oxygen.
The event is organised by Climbing Dojo in association with Polska Eire Festival, Mountaineering Ireland, and Basecamp.

THIS EVENT IS NOW SOLD OUT – there will be another opportunity to meet Adam Bielecki at Taste of Poland in teh Liberty Hall – you can GET YOUR TICKETS HERE. 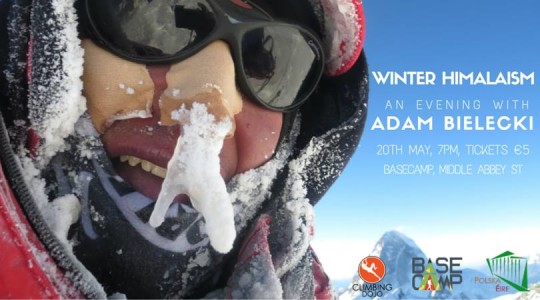