Events The Craic WIll Be Dobry!

Kayah & Kíla – Together in Dublin

Kayah & Kila Together in Dublin.

One and only show where Polish icon Kayah and a top folk Irish band Kíla will present a unique repertoire created especially for the purposes of the Festival.

It will also be the Closing Gala Concert of the Festival.

GET YOUR TICKETS HERE.

Kíla have had a long tradition of collaboration with musicians from around the world. In 2005 they recorded an album with Japanese/Ainu musician Oki ‘ Kíla & Oki. They have had many many guests onstage with them Dobet Gnahoré from the Ivory Coast, Zakir Hussain from India, Hiroshi Yamaguchi (the Bruce Springsteen of Japan), to name but a few.. They had an album of remixes released in Japan by various artists including trance expert Sakana, hard-rockers Zoobombs and OLAibi. They also collaborated on the U2 led single ‘The Ballad of Ronnie Drew’ which topped the Irish charts for 3 weeks.

Recently they have collaborated on two Oscar nominated animated feature soundtracks with the French composer Bruno Coulais – Secet of Kells (2009) & Song of the Sea (2015) The resulting soundtracks have both been released as albums.
2016 has found them still in the soundtrack and animated world. They are working on a TG4 project with 12 singers on 12 songs both past and present called Tobar an Cheoil (The Well of Music). Singers included in the line up are Laim Ó Maonlaí, Mary Coughlan, Lisa Hannigan and John Spillane.

Kayah is a Polish singer, composer, lyricist and joint owner of the record label Kayax. One of the most recognizable and appreciated artists on the Polish music scene. An all-round musician, dedicated mainly to folk, pop, soul and jazz music. The singer and writer of such hit songs as “Za późno”, “Supermenka”, “Na językach”, “Testosteron”, “Prawy do lewego”, “Śpij Kochanie Śpij”, or the Christmas song, “Ding Dong.” Kayah has been contributing to the Polish music scene since 1995, when she released her debut album – “Kamień”. The album received great reviews and the singer immediately gained the appreciation of her loyal fans.
Since then, Kayah has released 10 albums on which she explores her fascination with folk (“Kayah i Bregović”, “Transoriental Orchestra”), club (“Zebra”, “JakaJaKayah”, “Stereo typ”), soul and jazz music (“Kamień”, “Skała”), easily crossing genres to classical music (“Kayah & Royal Quartet”). Kayah was also the first artist from East-Central Europe to perform on an “MTV Unplugged” album. The double album “The Best and the Rest” released in 2005 served to crown the first stage of her artistic development, and the artist decided to bring her cooperation with Sony BMG record label to an end. Then she began to self-release her albums, as she jointly founded (with her longtime manager and friend, Tomik Grewiński) the record label Kayax. As the owner of Kayax, Kayah nurtures and promotes gifted artists, who delighted her with their musicality, charisma, talent and personality. The company has released over 90 music and book publications. 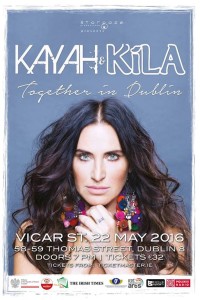